The three-breed auction will be held on-property at Kurralea Studs, near Ariah Park in NSW’s Riverina, and to meet demand from interstate buyers, simultaneously online via AuctionsPlus.

The 2021 sale saw records tumble with a total clearance of all 346 Poll Dorset, White Suffolk and Suffolk rams and stud principal Ben Prentice hopes to replicate that success.

“After a few tighter years in 2018-19, we made the decision to reduce our sale offering, as it was apparent people weren’t going to be needing as many rams due to a reduction in ewe numbers”

“Last year, in recognition of the good season and demand from clients our sale offering went up from 300 to nearly 350 rams. We are planning to offer those numbers again at this year’s sale. It’s great to see such enthusiasm in the sheep industry continuing this year.” Mr Prentice said.

Now nearing the completion of the stud’s lambing season Mr Prentice added, “It has been very productive and a good year so far. We’re really happy with the progeny of a few new sires coming through this year and how they are presenting this early in their development”.

Highlights from this year’s drop are impressive progeny from Poll Dorset sire, Shirlee Downs 2-20 along with great group of lambs from the 2021 sale topping White Suffolk ram, Kurralea 312-20.

The stud is planning to offer at the September auction a similar number of rams to last year’s sale; 170 Poll Dorsets and White Suffolks, and 10 Suffolk rams.

“The rams have enjoyed a good start being on a paddock of oats that has a fair bit of bulk in it. They’re looking good and should present well for the sale”.

“We have just wrapped up shearing and are very happy with how the sale rams have come out of the wool. They are presenting as a very even and consistent line of rams and are shaping up well.”

Poll Dorset sire Kurralea 636-17, a ram who has performed exceedingly well over several years will feature heavily.  “This is his third drop. He is a very prominent sire and has bred very well for us in recent years,” Mr Prentice said.

A son of 636-17, Kurralea 27-19, will also have his first progeny go through the ring in this year’s sale and is expected to match his father’s success.

Another feature sire, White Suffolk ram Kurralea 9-19, has a first-class group of progeny on offer. Kurralea retained semen use of this sire when the ram sold in 2020 for a stud White Suffolk record of $20,000.

“This will be our only drop by him, and they’re an outstanding group who will feature heavily in the stud ram section of the White Suffolks”, added Mr Prentice.  He noted two of this sire’s stand out sons since lambs are 13-21 and 34-21.

Industry confidence remains strong and Mr Prentice hopes that is reflected in demand, especially on the back of overwhelmingly positive feedback from buyers at the 2021 sale. 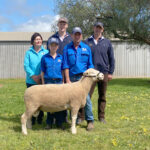 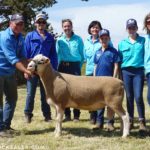