Consequently, the result saw another total clearance, topping at $18,000 and averaging $1605.

The average was up $178 and the top was up $5000 on last year, but because of the season rapidly deteriorating in the region through lack of late winter/spring rain the Prentice family offered 48 fewer rams than they did during the very wet 2016 sale period.

Following great success at the Adelaide Show early in September, and more recently at the Melbourne Royal, which was completed less than two days before the sale where they were most successful White Suffolk exhibitor and most successful Poll Dorset ram exhibitor, a predictable increase in stud ram demand eventuated.

Four Poll Dorset rams, plus one White Suffolk all exceeded $10,000.

It was the fourth ram offered in the opening Poll Dorset stud ram draft that topped the sale at $18,000.

This was Kurralea 160165 Twin that was champion ram at Adelaide Royal this year.

Backing his judgment, it was Adelaide judge, Tim Ferguson, Mallee Park stud, Hopetoun who was the winning bidder.

Buying through Landmark Birchip, he bid on the phone to get the ram that had impressed him so much.

With outstanding phenotype, its balanced Lambplan figures were just as impressive, including 17.4 Pwwt, -1.1 Pfat, 1.0 Pemd, culminating in a Carcase Plus index of 205.

Its twin brother and winning pair mate from Adelaide sold one lot later for $11,000, going to Mary Burzacott and Michael Emerey, Mulgundawa stud, via Kingston in SA.

Charles Rowett, bidding for his parents, Clayton and Andrea Rowett, Ulandi Park stud, Marrabel, SA was the purchaser of the next ram offered, Kurralea 160234, sired by Aberdeen 140757 for the sale’s second top price of $15,000.

This ram was the first prize winner in the May drop class at both Adelaide and Melbourne Royals and went on to also be Reserve Senior Champion at Melbourne.

Beautifully balanced and very structurally correct, the Rowetts had their eye on the ram after first seeing it at Adelaide. With a Pwwt EBV of +16.4 and C+ index of 200, its genotype was just as impressive as its visual excellence.

Tremendously powerful and with outstanding muscling, including an EBV of 2.1, this top son of Warburn 140097 created a lot of pre-sale interest.

Kurralea 160182 at 137kg impressed many, selling for $11,000 to a syndicate, headed by Andrew Hiscock, Brurob, Kilmore, Vic with the Donnan family, Anden stud, Woomelang, Vic a semen partner.

The second top price was only $4500, paid by Conapaira White Suffolks, Rankin Springs, NSW for the reserve champion ram at the just completed Melbourne Royal, where it was also in the winning interbreed trifecta pen of three rams for the White Suffolk breed.

They also purchased another at $3000, while Clover Valley White Suffolks, Stuart Mill, Vic paid $4000 and $2500 for two stud rams in real value buying.

Thirty five of the 72 registered bidders were successful purchasers on the large and impressive flock ram drafts of 132 rams in the two main breeds, plus the first time offering of six Suffolk rams.

Based on the very positive results their clients are consistently achieving with Kurralea genetics, Greg Moncrieff, Moncrieff. Condobolin has supported this sale for a very long time, this year being no exception.

These clients are always prepared to grab any value rams from the stud drafts, including six this year.

W & L Ramsey with eight Poll Dorsets and one White Suffolk at a $1678 average, and McDonald Bros with eight White Suffolks at a $1675 average were the most prominent of the Moncrieff clients.

By comparison the first run of 72 White Suffolks provided super value and averaged just $1011, while the last run of 60 actually averaged a little more at $1023 as buyers competed more strongly near the end in an effort to get their required numbers.

The Prentices also offered 6 Suffolk rams in the middle of the sale for the first time and these all cleared at $800 each.

The sale was conducted by Elders with Michael Glasser, GTSM, and Joe Wilks, Elders, the auctioneers. 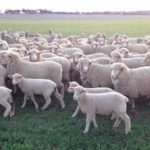 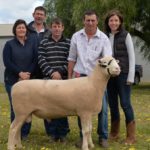