A total clearance of all 346 Poll Dorset, White Suffolk and Suffolk rams has marked the Prentice family’s Kurralea Stud annual sale held last week as one of the stud’s most successful to date.

Spirited competition between the large crowd of sheep producers who gathered at the Ariah Park property, along with a big group of online bidders from all parts of Australia kept the auction running hot until the last ram sold.

The White Suffolk stud ram group were the best sellers, averaging $5441 each with the sale-topping White Suffolk ram, Lot 22, knocked down at $16,000.

Dave Ingram said they were his top two picks. “We were chasing good, clean faces and a really good frame and were very happy with the purchases which will help our operation to keep growing” he said.

The Ingram family has bought rams from previous Kurralea sales and know they work in local conditions. “We were lucky to get them for what we did; it’s not very often you get your first and second pick,” Mr Ingram said.

“Kurralea does a terrific job; what you see is what you get.”

“We like the type of sheep Kurralea are breeding, with length, good muscle and true White Suffolk type that is pretty hard to come by these days,” Mr Hull said.

“We purchased from Kurralea a couple of years ago and used semen so we know their sheep are true to type and do well.”

Dimity Comb, who along with brother James purchased on behalf of their parents, said they believed Lot 23 was the pick of the White Suffolk stud rams. “We thought he was a really sound animal structurally and his carcase was faultless,” Ms Comb said.

“My father Doug is always big on a good hind quarter with depth and width so that was important for us, and he stood very well on his feet and has a nice big Suffolk face. Lot 22 went for more but we preferred Lot 23 so we were very happy.”

Ms Comb said Lot 26 was one of the heavier rams and had a nice hind.

The Comb family will take the rams to a 57,000-acre farm north of Hay to breed and sell to buyers, mostly around the Riverina. “It’s a bigger farm than most White Suffolk breeders so we need rams that are going to stand well and have longevity for clients,” she said.

“We have bought before from Kurralea and felt happy going back there.”

“I expected to get about 85 at auction to fill orders for our properties but there was stiff competition,” Mr Campbell said.

“The rams were very solid and Kurralea has plenty of depth; you get to 300 and they’re still great rams and that’s why we go back.”

Nearby farmer Ben Cassidy from Foylewood Farming went to the auction to buy four Poll Dorset rams but came away with 10.

“We were very impressed with the line-up,” he said. “We went there to buy four but were blown away by the quality so we ended up getting 10 at an average of about $2100.”

They have changed plans as a result of the extra purchases. “We were going to have a split joining but we decided to buy more on the quality of the sheep and put our joinings together,” Mr Cassidy said.

Auctioneer Joe Wilks from Wilks McKean said the 100 per cent clearance was impressive with the substantial number of rams the Prentice family put up for auction this year.

“It was the best draft I’ve seen from start to finish,” said Mr Wilks. “The interest in the rams didn’t tail off with the last 10 rams of day making over $2000”

“Ben & Lucy’s many years of effort is paying off and they are reaping the rewards”.

Mr Wilks said there was good AuctionsPlus support for the stud ram group and a strong contingent of repeat buyers and some new faces in the ring at the Ariah Park property.

The Prentice family were thrilled with the final sale results.  “Our aim is to breed and present a large line-up of rams, that are consistent the whole way though. So to achieve this, with strong prices is very rewarding”, said stud principal Ben Prentice.

“It’s great to receive such positive feedback from clients using our rams in a wide range of climates & for different markets. We are very pleased”. 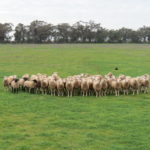 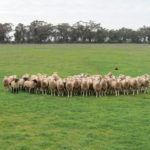