“We were very excited to see him sell like he did,” Mr Prentice said.

“We thought he was a pretty handy ram that would attract attention but you can’t imagine they’re going to make those sort of numbers.”

“His sire, Syd, badly broke his leg when he was a lamb but he recovered from that & became one of our leading sires.”

He said the ram, which was sold as Lot 4, had the top LAMBPLAN figures of his drop.

“He had the highest muscle scan of any of our lambs, both Poll Dorsets & White Suffolks,” Mr Prentice said.

His purchaser, Chris Squires said he was attracted by the ram’s genetics & figures.

“He’s got plenty of growth & a lot of muscle in his figures & he’s a very correct sheep,” Mr Squires said.

Mr Squires said he had used Kurralea semen back in the 1990s when he was first starting his stud.

He said they aimed to breed easy-doing sheep for their client base & would start utilising the Kurralea ram in their program as soon as possible.

“As soon as we can get him home & get some semen out of him we’ll use him in our AI & ET program,” Mr Squires said.

“The lamb industry at this point is really booming and the Poll Dorset breeders are looking to consolidate what they’ve got and drive forward the advantage that we have,” Ms Roberts said.

Courtesy of Olivia Calver, THE LAND 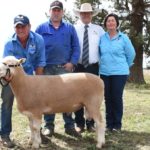 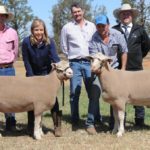