After achieving a national-record Poll Dorset ram price of $28,000 last year, it was the flock ram result that captured the headlines this year.

Stud buyers locked in bargain after bargain. Mark and Peter Yates, Barwon Poll Dorset stud, Yerong Creek, paid $8500 to secure the sale topper. The 136-kilogram K120028Tw is an April-drop son of UP 080185 and prize-winner at Adelaide and Bendigo this year. 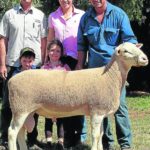 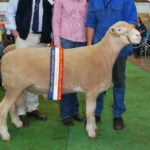